A key objective of any staff availability management system is to ensure that the right people know about staffing shortfalls as soon as they happen. The sooner they know the sooner they can solve the problem. But managers and team leaders are busy people, so wouldn’t it be easier for them if they were pro-actively informed of unforeseen staffing issues?

Email and text messaging are the most popular ways for Gartan Availability and Gartan Roster to inform users of staffing problems. But now there’s a third way. Gartan Messaging is a facility accessible across all our solutions that allows users to communicate by creating and receiving internal messages. 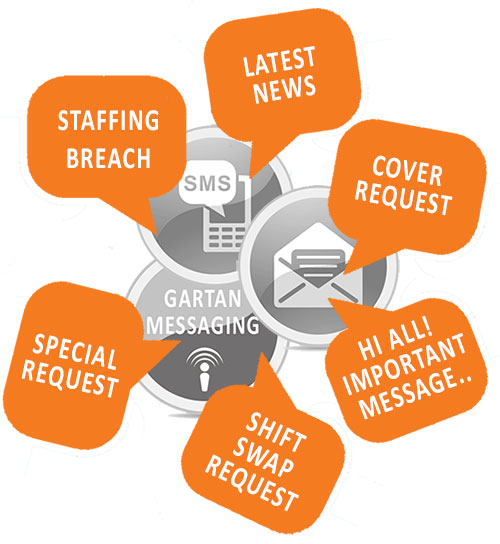 Gartan users can share messages and can manage their messages from whichever Gartan solution they have access to. Gartan Availability, Gartan Payroll and Gartan Roster and the associated apps. The messages are used to, for example, broadcast specific or general information to staff. They can also be used to send automated staffing breach notifications to specified personnel. Some of our Clients use Gartan Messaging in Gartan Availability and Gartan Roster to request shift and cover swaps. Smartphone users, similar to receiving a text message, will be alerted by our app when a new Gartan message arrives. Simple!

Comments are closed.
« Previous
Next »